Wait a minute! Comedy at a machine learning conference?

Yes, indeed, Marketing Analytics Summit (June 17-19 in Vegas) has added Yoram Bauman – the world’s first and only “stand-up economist” – to the roster.

As Earl Wilson famously said, “An economist is an expert who will know tomorrow why the things he predicted yesterday didn’t happen.”

As Yoram’s father infamously said, “You can’t do that – there’s no demand.” And yet, Yoram has made a splash on TV and the stage by being a supply-side comic. 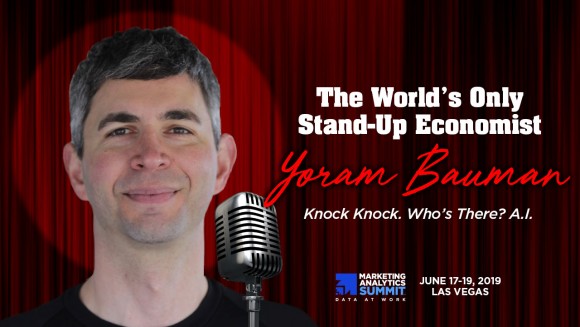 Yoram Bauman, “the world’s first and only stand-up economist”, performs regularly at colleges and corporate events, sharing the stage with everyone from the late Robin Williams to Paul Krugman. He has appeared in TIME Magazine and on PBS and NPR and is the co-author of the Cartoon Introduction to Climate Change and the two-volume Cartoon Introduction to Economics, which is now available in Mandarin, Mongolian, and a dozen other languages. Speaking of foreign languages, he is also the organizer of the humor session at the annual meeting of the American Economic Association.

Yoram now lives in Salt Lake City but spent the prior two decades in Seattle, where he was the founder of Carbon Washington, which in 2016 placed the first-ever carbon tax measure on the ballot in the United States. He has a BA in mathematics from Reed College and a Ph.D. in economics from the University of Washington. His goals in life are to spread joy to the world through economics comedy, to reform economics education, and to implement carbon pricing.

Get on board as a blog or media partner, share the latest news and earn complimentary tickets: contact [email protected]

To learn more about our sponsorship opportunities, contact [email protected]

We look forward to seeing you at Marketing Analytics Summit!

What to expect from the first virtual edition
We go virtual!
What do you wish non-analysts understood?

What are cookies?
Cookies, among other things, help to make your visit to our website simpler, more pleasant and more logically structured. Cookies are information data which your web browser automatically stores on your computer’s hard disc when you visit our website. Cookies do not do any damage to your computer’s hard disc and they do not transmit any of your personal data to us.

Our Cookie policy – How we use cookies
We use cookies, for instance, to be able to identify you as a registered user without you needing to log in every time. Use does not mean that we receive new personal data about you as an online visitor. Most Internet browsers accept cookies automatically. You may, however, configure your browser so that no cookies are stored on your computer or so that you receive a warning whenever you receive a new cookie. Our cookies don't store sensitive information such as your name, address or payment details. However, if you'd prefer to restrict, block or delete cookies from our website, or any other website, you can use your browser to do this. Each browser is different, so check the 'Help' menu of your particular browser (or your mobile phone’s user manual) to change your cookie preferences. Deactivating cookies may mean that you cannot use all of the functions of our website.

We use the web analysis service Google Analytics to continuously streamline and optimise our sites for users. For this purpose, pseudonymised user profiles are created and small text files are used that are stored on your computer (‘cookies’). The information produced by the cookie about your use of this website, such as

is transmitted to servers of Google Inc. in the USA and stored there. This information is used to evaluate the use of our website, to compile reports on website activities and to provide other services connected with the use of the website and Internet use for purposes of market research and to enable these Internet sites to be made more user-friendly. If necessary, this information is also transmitted to third parties to the extent that this is prescribed by law or if third parties process the data for us. In no event is the IP address ever brought into association with other data relating to the user. IP addresses are anonymised to prevent them from being matched (IP masking).

Users may configure their browsers to prevent cookies from being installed. However, we would point out that in this case it may not be possible to use all of the functions of this website to the full extent